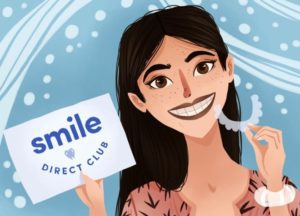 There used to be a video on YouTube by someone who called herself Rosie Posie. This video has since been removed. I have my suspicions of why (see this post about Smile Direct Club’s policy about negative reviews. No worries, though, I watched this video several times and can summarize it here.

Rosie was detailing her Smile Direct treatment with a vlog. She’s entering her sixth month of treatment. On the video, she opened her new set of aligners and proceeded to try to put them in. The struggle for her to get these aligners in went on for about twenty minutes before she finally gave up. Eventually, a follow-up video came out that explained what happened.

Smile Direct Club sent her month five aligners in the fourth month. Then, they shipped out the month four aligners in the fifth month. This means when she went to put in the month sixth aligners, she was actually a month behind her treatment. The distance of the teeth made it impossible for her to get in the next stage of aligners.

You may think, “What’s the big deal?” It’s just one month. This is the equivalent of a dentist accidentally removing the wrong tooth. When Rosie jumped over a month’s treatment, it put stress on her teeth. When they then sent the previous month’s aligners, that put additional stress on her teeth. This would have caused some bone resorption, which she isn’t even aware happened, which in turn weakened her teeth and threatened their longevity. If this happened more than once, she could have lost some teeth. I would love to see before and after x-rays of her root and bone structure.

Here is the crux of the problem with this. Rosie was left to figure this out herself. The only reason she received help and learned what went wrong is the video gained traction and garnered the attention of Smile Direct Club. There is no real monitoring of your case. There have been several people who’ve stated that even when they reached out to Smile Direct about a problem they were having, the follow-up customer service was practically nonexistent. This makes me wonder if the only reason Rosie got the help she needed is because it was such a public issue.

The safest way for you to get your orthodontics done, whether it is traditional braces or invisible aligners, such as Invisalign, is under the direct supervision of a qualified dentist who can monitor your progress and ensure the treatment is progressing as it should. Our bodies do not always follow directions and sometimes the dentist has to intervene and change the treatment plan to accomodate the disobedient teeth.

This blog is brought to you by Glenpool Dentist Dr. Noah Ryan.